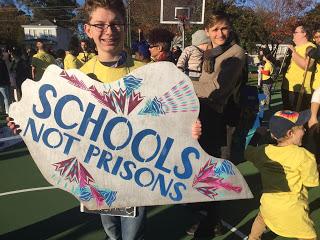 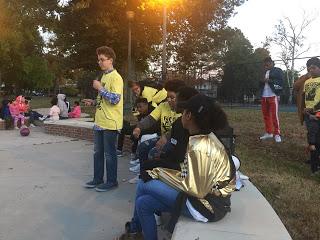 Yesterday I attended Art 180's, Performing Statistics', and RISE for Youth's joint event, the Juvenile Justice Parade. It was organized by black and brown youth, all of which have faced personal discrimination and many of which who have been personally sent through the school-to-prison-pipeline. The chants spanned from "Fund education, not incarceration, invest in us, invest in us," to as simple as, "Prisons don't work!" We each were holding at least one piece of artwork from formerly incarcerated youth, organized by Art 180, and we took their art to the streets with a moving march, literally and figuratively.


We started at a community center and ended at a park, marching through backstreets and backstreets only. I felt weird about being guided by the police car and chanting these things in the first person, but I had to set my awkwardness aside to focus on the bigger picture-- the mobilization and the movement.


At the beginning and end we heard speeches (one by my friend Stephanie), songs, raps, poetry, and freestyle dances, all of which going to support a bigger cause. In the park there was an open mic after all of the scheduled speakers had gone, and I shared my poetry "Do Nothing" with a feeling of hope. 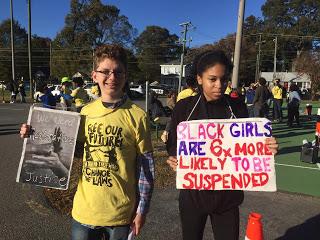 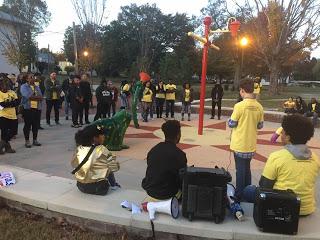 This seems like a lot, but it really isn't. The simplest of actions that I will argue is simpler than attending an event. What can you do often that will help you show up, get involved, and most importantly, spread your voice? Talking, listening, discussing. Its as simple as that. No matter who you are, what you do, you cannot change the world alone. But with a group you can.


It has recently come to my attention that we all need groups (even just 3 other people) to thrive in activism, introverts and extroverts alike. So, a whole year ago, I made an after school club called TCLU (or the ACLU of Tuckahoe Middle) and went through the biweekly craziness for a year (kudos to Ms McNew and Hayes). In the summer, it continued as the Teen Advocacy Group of Richmond, TAGRVA. It was a rocky rollercoaster, not much of one at that, but eventually, through simply showing up again and again, it stabilized.


We have five people in total, and it doesn't seem like much, but it is. My point is anyone can go anywhere if they continue to show up for and with other people. "Anyone" in that sentence is the word I had forgotten about for so long, but then we had an idea.


We decided we could expand TAG so anyone could make their own. All they'd need is people, a time-frame, and a venue. Ours are friends who live nearby, Wednesday evenings, and my house. Its that simple, yet that important to talk to other people with other backgrounds and ideas. If you are a teenager or know one who may be interested in forming a group, you can learn more at www.tagrva.com.

My point here is that even something as simple as brainstorming action with friends frequently, or attending an event, really matters-- your first step is to show up.

I had the opportunity to be on the organizing committee of the Women’s March and Expo in Richmond, VA. I stood there today because at age 13, people would rather comment on my body than my intellect, which is why I became a Womanist, a term coined by Alice Walker in 1979 that describes a Black feminist who analyzes the intersections of race, gender and sexuality. According to Linda Napikoski of ThoughtCo.com states that a Womanist identifies and criticizes sexism in the Black empowerment movement and racism in the feminist movement. I identify as a womanist solely based on my encounters with White feminism, which has a focus on the issues that primarily affect White women, as opposed to all women.  “Womanist is to feminist as purple is to lavender.”  – Alice Walker As a result, the concept of Intersectional Feminism was introduced which acknowledges how race, gender, sexuality, class, ability etc. are interconnected. The term “intersectional feminist” is being thrown around so much by…
Read more 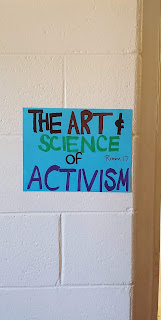